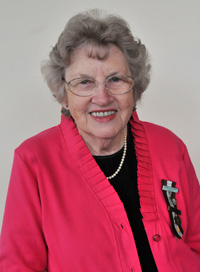 Pope Benedict XVI has bestowed the Cross Pro Ecclesia et Pontifice on Mrs Madge Fahy, immediate past National President of the Catholic Women’s League of Australia (CWLA). Also known as the Cross of Honour, the award was established in 1888 by Pope Leo XIII and is given to clergy, religious and the laity for distinguished service to the Church. It is the highest medal that can be awarded to a lay person by the Papacy. The gold medal features the images of Saints Peter and Paul and the Holy See's Coat of Arms.

Luminaries who have received this award include Professor William May, Mother Angelica and George Weigel. Archbishop Denis Hart will present Madge with the award during the 11 am Mass at St Patrick's Cathedral on Sunday 20 May.

Madge has been a member of the Catholic Women’s League for 25 years. As well serving as CWLA’s National President for the past two years (2010-11), Madge has also served as the General President of CWL Victoria and Wagga Wagga (2006-2008), a Member of the CWL Victoria and Wagga Wagga Governing Body (2002-2010), the CWLA National Social Issues Convenor (1999-2001), the Treasurer of the WUCWO Assembly Planning Committee (1991-1996), and the CWLA National International Secretary (2002-2007) where she represented the League at the Commission on the Status of Women at the United Nations for six years.

Madge has arguably led CWLA through a period of the most significant changes in its history. She has overseen the establishment of the CWLA Research Centre and the employment of a gifted young Catholic bioethicist, Dr Brigid McKenna MBBS MBioeth, so that CWLA may provide some original research, backed by sound evidence and ethical expertise, amidst the many complex issues emerging in the Australian and international community. In response to the Holy Father’s invitation to “… join the network of relationships which the digital era has made possible…”, Madge actively and enthusiastically engaged with younger members of the League to launch CWLA into the world of social media, and also to build a dynamic online presence through a new website. CWLA is now able to bring the light of the Gospel to a much wider audience.

Locally, Madge is the President of the Burwood Branch of the League. She is an Extraordinary Minister of the Eucharist, is the area coordinator for Benedicare, is a member of St Benedict’s Flower and Altar Linen Groups, and drives older parishioners to Mass as well as helping to count the Parish collections each week.

Madge has also been closely involved with the cause of Dr Sr Mary Glowrey JMJ since its inception and has been deeply inspired by her example. Although the cause of Dr Sr Mary Glowrey JMJ is in its preliminary phase, much work has already been undertaken including the photocopying of the extensive Glowrey Papers that were sent to the postulator and the Society of Jesus, Mary and Joseph in Bangalore, India. Madge spent more than 35 hours carefully copying these fragile documents. This is just one wonderful example of how she shows her love of Christ not only in the ‘big’ things but also the ‘small’ things.